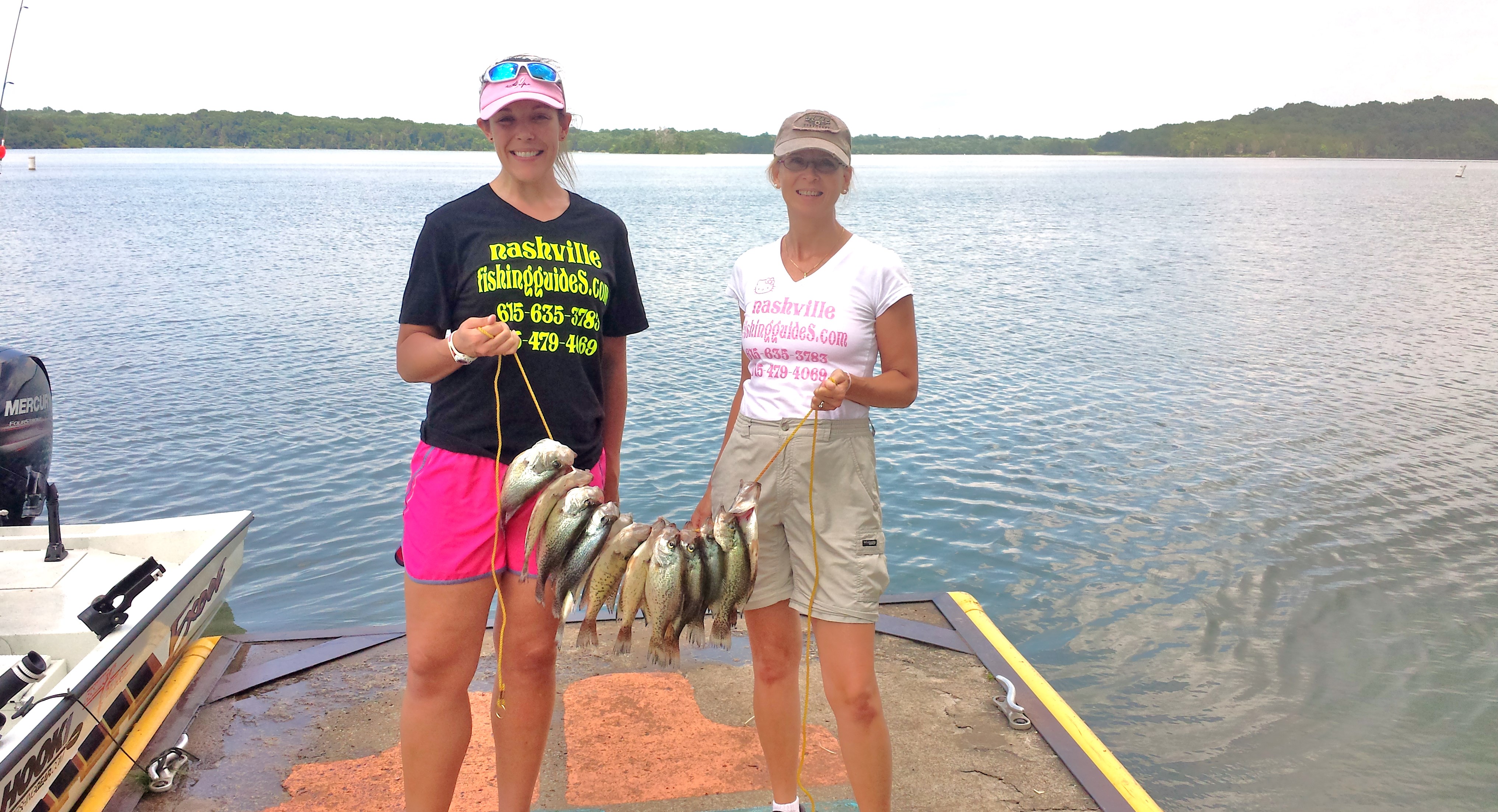 Danielle Huston, originally from the Nashville area, and Susanne (Susi) Deifel-Johnson, originally from southern Germany (and also Merv Johnson’s wife of scant 7 seven years) went out with Nashville Fishing Guide Merv Johnson around 6.15 am on June 12. It was a crisp and sunny morning, slightly hazy, where the first run after the boat had been launched at Seven Points boat ramp drew a few chills. After finding our first brushpile at Cook’s Cove, where we shut off the big motor and set about slowly trolling, using jigs and minnows, the surface of the lake was flat as a mirror.

On her first cast, Danielle reeled in a double of 2 fat 12 inch crappies!! Over the next hour or so, Merv and Susi each caught 2 as well and Danielle another, before we took off for another spot.

As the temperatures got warmer and the morning haze completely went away, the fish seemed to get a little lazier snatching up our offerings. We tried a few more brushpiles, catching another fish every once in a while. Susi even cast a few plastic crawdads in order to lure some bass – but the bass seemed to have found better offerings elsewhere. We caught a total of 13 keeper crappies, which is not bad for 2 novice fisherwomen. The day was rounded up with a scrumptuous lunch at Shipwreck Cove.

All in all it was a pleasant morning and a decent catch.

On a beautiful Sunday morning, Nashville fishing guides cruised out of Fate Sanders marina on J Percy Priest lake with friend Gus and headed out for a fun morning of crappie fishing.

Motoring out to known brushpiles, they began fishing in 16 feet of water, using jigs and minnows. After fishing at about 10 feet for awhile and getting no hits, they started plying deeper and soon found the magical depth the crappie were holding at. Using a black magic marker, they marked their fluorescent yellow lines so they could quickly return to the same depth.

They continued this pattern on several similar brushpiles and all told, managed to catch 26 keeper (10 inch or better) crappies, plus numerous short fish.

Fishing should remain steady now that summer is here, the spawn is done and the fish have moved to deeper water.

The crappie are in their summer patterns so give us a call and book your trip today!

On June 7th both Nashville Fishing Guides, Merv Johnson headed out in pursuit of Crappie for dinner with Jonathan Soultatos aka ‘Salty’ – who is originally from Florida.

We headed out of Fate Sanders marina around 5am. The fish started biting early and a sufficient amount of Crappie was caught before lunch.