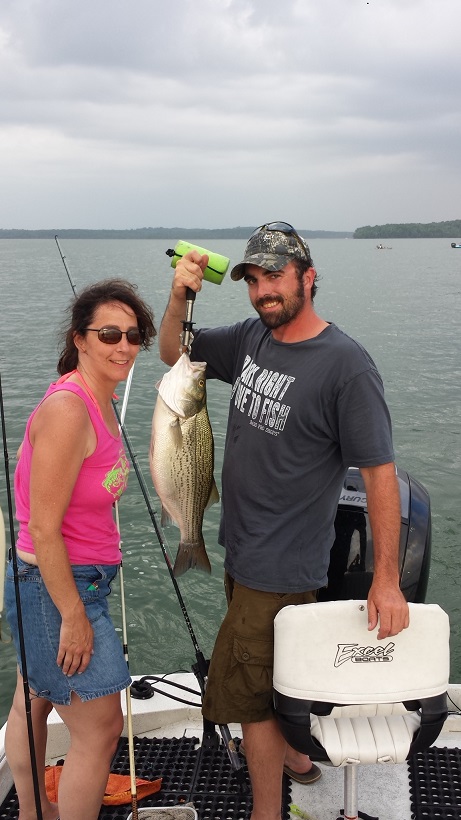 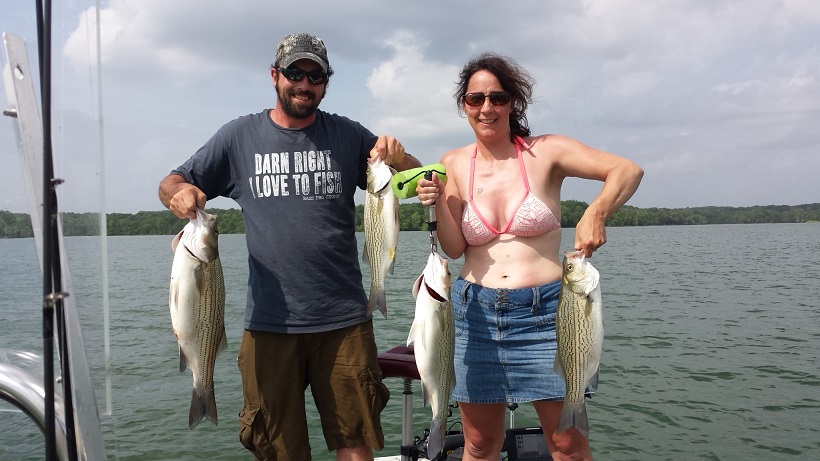 The day was stifling hot and humid as we set sail in search of the elusive hybrids of Percy Priest lake outside Nashville.

Wanting to locate the fish before we set out live bait rigs, we put out two umbrella rigs and two crankbaits so we could troll whilst doing the search thingee.

We trolled for about two hours, hitting all the suspect points, humps, ledges, etc without so much as a hit.

So we sat and trolled, picking our noses and flipping boogers…….

FINALLY! We started marking fish! Stopping the boat, we reeled in the umbrella rigs and the crankbaits and switched over to live bait. Got everything set up, 8 rods fishing. Four side planers, two back rods on balloons, and two down rods running right beside the boat.

Trolled through the fish a coupla times without hooking up. Had a coupla hits where the baits got stolen so that was a good  sign.

AND THEN…..we finally get a fish on and Jennifer and Jason are telling each other to get the rod. He, being a gentleman, is wanting the lady to go first. She, who bought the trip for him as a gift, wants him to catch the fish! I’m just saying would SOMEBODY grab the damn rod!!!! (Being the captain, I always let the customer get the rods). A lot of the fun and excitement of hybrid fishing is trying to pull the rod out of the rod holder when a big fish is trying to take the rod into the briny (OK, not so briny on a freshwater lake, but it lends itself to the story a lot better than “freshwater”.).

Finally Jason grabs the rod and pulls in the first fish of the day. But then the unexpected happens, another rod goes off! BAM! Jennifer is hooked into a nice 4 lb’er and these fish fight hard.

Jason almost has his fish in when ANOTHER rod goes down! We’ve got three fish going at the same time and only two fishermen in the boat and they are both fighting fish.

I have a pretty hard and fast rule….I don’t reel in fish. The clients are paying me to let them reel in the fish and have the fun of the fight so I will just let a fish hang itself and we rarely lose one this way.

As soon as Jason lands his fish, I take his rod and he grabs the other rod. He no more than starts to crank it in and ANOTHER rod goes down! I help Jennifer land her fish, grab her rod and send her to get the other rod with a fish on.

Now, they are both battling away, I’m taking two fish off the lines when a FIFTH rod gets hit! Talk about pandemonium and chaos??? Jason gets his fish in and grabs the latest rod to get hit. I now have three fish in the boat and two on lines.

Shortening this story up, we got all five fish boated, threw back the smallest three pounder, photographed the four remaining fish, then released ALL of them. Every fish kicked out of our hands HARD and took off.

Later on towards the end of the trip, Jennifer hooked up with a fat 9.5 lb’er. Gave her a real fun fight.

Got it in, photographed it, released it and then THE STORM BLEW IN!

Luckily we were only a couple miles out of the marina and we made it back in before the heaviest part hit.

Summing it all up, this hybrid fishing can be a bust all day and then you get hit with a maelstrom, rods going off all over the place. It kinda makes one forget the boring previous two or three hours of trolling and watching empty rods.

I had a great time chatting with Jason and Jennifer but an even greater time when all hell broke loose. Hopefully this will be a trip they remember for a long time.