Greg Boyce and Merv Johnson had a pretty good morning fishing J Percy Priest lake. The hybrids and rockfish were fairly active for a while but the bite died off about 10:30. Since we had taken off at 4am already, that was just about as much funs is this scaldingly hot day as we could handle.
We caught a total of 10 fish. Two rockfish, 22 and 24 lbs, 7 hybrids ranging in weight from 3 lbs to 13 lbs. Most in the 8-10 lb range. And one overly aggressive little 12 in largemouth bass that we released so that it could grow up to legal size… 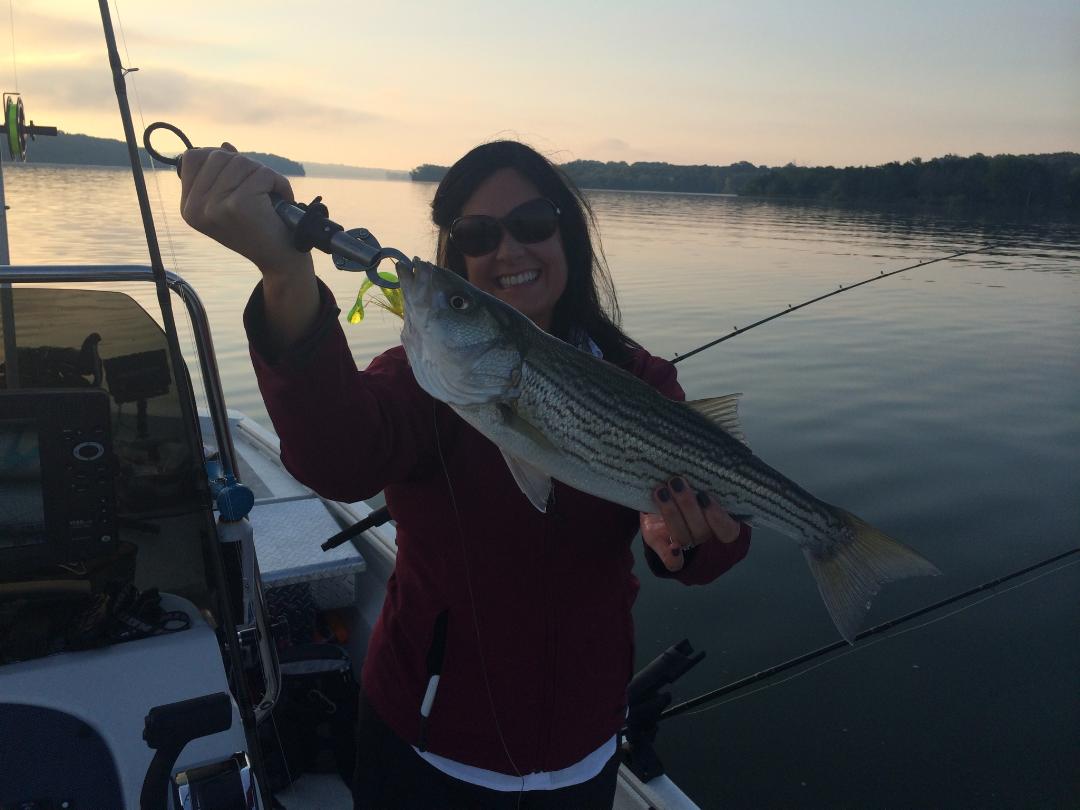 Went out today with Sarah and Erich R. looking for some rockfish on J Percy Priest.
Fishing was tough with a high pressure system setting on us, end of a cold front week. Bluebird skies and no breeze make for nice fishing conditions, but not good conditions for CATCHING fish.

Sarah managed to catch on nice rockfish to salvage a beautiful morning on the lake. Thanks guys, I had a great time with you, as usual. Next time let’s hope the weather and fish are better aligned for us!

We headed out on a misty afternoon in search of the elusive (and in the words of my friend Paul) mystical and possible mythical,

more commonly known to locals as “rockfish”. These are fish that can reach weights into the mid sixty pound range. The state record for our state, Tennessee, is 65 lbs. 6 oz. We were just hoping to catch any of them on this drizzly afternoon.

I keep saying “we” because I was fishing with my friend, Bob Alsup, who is an avid rockfish and hybrid (Cherokee Bass) fisherman. When Bob is not working at his job as a sales rep for Laguna Tools, he can be found on one of Tennessee’s TVA system lakes, usually fishing for rockfish and hybrids. In the spring, he will stray off to load the boat with crappies, but his main passion is the rockfish.

We knew from past experience that trolling was the fastest method for us to locate active fish as we would troll at 2.5 MPH and would cover miles of lake surface, giving us ample opportunity to find fish. We started by setting out side planing boards attached to 200 # test line connected to a planer mast with reels spooled with 200 ft of this line. We had marked the fluorescent yellow line with a black marker at the 100 ft. length so we would get both left and right side planers, Riviera dual planer boards, out the same distance from the boat.

We then took our 7′-6″  Ugly Stix  rods with Daiwa 47LC  line counter reels spooled with 300 yards of 20# test braided “super line”, attached a 1/2 ounce jig, threaded on a chartreuse 4 inch Sassy Shad from Mister Twister and started letting out line. When we’d get to 50 ft, we would put a 3 ounce snap weight,

ht (on the line, then release another 65 feet of line. Past experience has taught us that this will put the baits at about 20 feet deep, where we usually marked most of our quarry on the graphs.

Once we had the lines set at the preferred distance down and back, we then attached a release clip to the fishing line and attached a shower curtain hook to the release. We then hooked that onto the side planer line and let out more line from the reel until the line was almost out to the planer board, making the line and lure travel away from the boat about 100 feet. This setup works best for the rockfish and hybrids because they tend to shy away from the boat and in doing so, they will come in contact with our trolled baits that are riding 100 feet away from the boat and 115 feet in back of the boat. Each rod that we put out on it’s respective side is spaced about 10-15 feet apart down the planer line.

We proceed to do this with the remaining 5 rods until all six are in the rod holders and we are now “fishing”.

On this day, we were in the middle of setting out lines when one rods goes into violent, spastic dips and jerks, signalling the hookup of a nice fish. Being the closest to the rod and Bob had a rod in his hand, just setting it out, it was my fish to handle. Pulling the rod out of the holder with a wild fish on the end of the line AND still trolling at 2.5 MPH, can be a challenge at times. I managed to wrestle the rod out and commenced to lift, reel down, lift, reel down. Once I finally got the fish to the boat, it is quickly weighed,CPR’d (Catch, Photograph, Release) the line is reset and it’s back to fishing again. The first fish of the afternoon was a midsize hybrid (Cherokee bass) of 7 pounds.

The drizzle had stopped and the sun came out making it very humid. The rainsuits came off, the shirts came off and the trolling continued.

And then a rod went off! And there was a SERIOUS bend in the rod. Bob told me to grab the rod since he was steering the boat and wanted to keep us on the river’s ledge. (Bob likes to let me do the grunt work of reeling in the fish, while he regales me with tales of his fishing prowess). 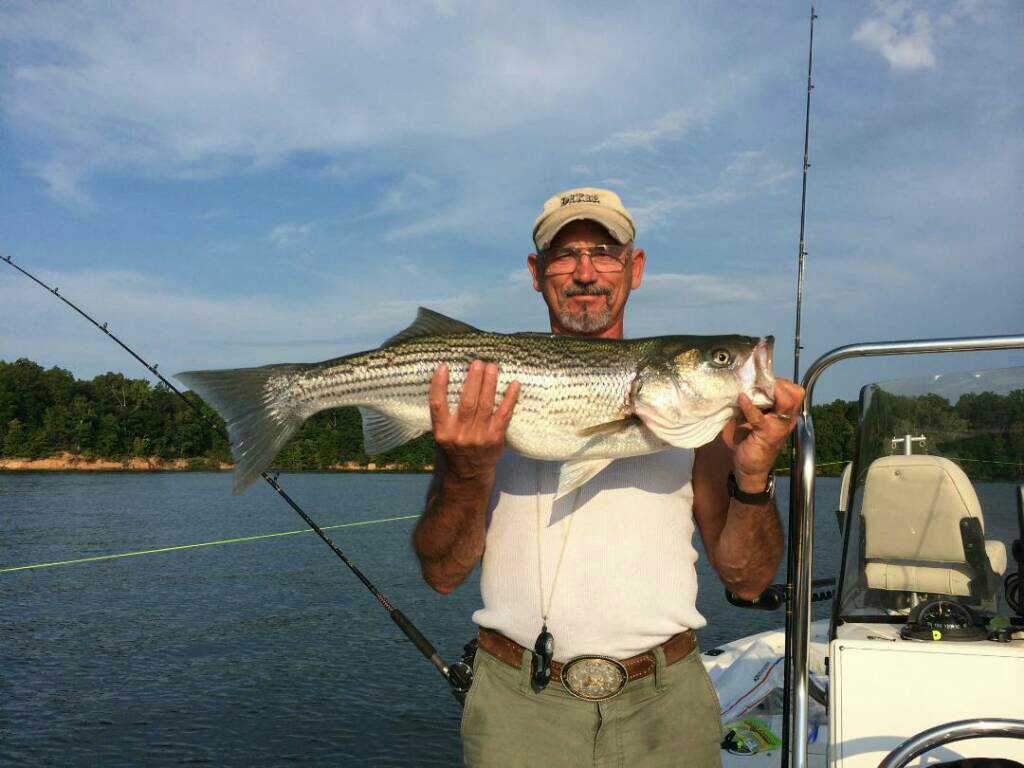 I pulled the rod out of the holder and knew immediately this was a very good sized fish. I would reel in 20 feet of line and it would pull out 40 feet of line. I was making no headway and actually losing ground here. Fighting the fish and fighting the speed of the boat was proving to be no easy chore, but when trolling 6 lines, 165 feet behind the boat, if you slow down or stop, the remaining lines fall to the bottom (average depth of 100 feet or more, with trees rising from the bottom to within 50-60 feet from the surface) and you snag all your lines. This would entail breaking them off or cutting lines and losing a lot of money in snapweights (average $8.00 each for weight and release) plus downtime to retie and reset lines. Sooo, you fight the fish and the drag from the speed of the boat.

Having only 20# test line on this rod, I couldn’t put too much pressure on the fish, not wanting to break the line or pull the hook out of it’s mouth, it was game on for about two minutes. Then the fish made some violent headshakes and totally destroyed the hook on the jig! I have never seen a hook so twisted in my life! The hook, and this was a heavy duty saltwater hook that we have used on our rods for years and never had one mangled like that, was almost straightened out and the big guy got to swim away.

And this is why it’s called “fishing” and not “catching” Sometimes the fisherman wins and lots of times the fish wins.

We would go on to boat a total of 12 fish for the afternoon, a mix of stripers (rockfish), hybrids, and a one 3 lb smallmouth that hit right at the end of our trip. All things considered, a very fun, exciting and enjoyable afternoon on a beautiful lake, great weather, and a pleasant fishing partner. Life couldn’t be any more pleasurable!